US Congressman John Robert Lewis, a stalwart of the American civil rights movement and a champion of racial equality and justice, passed away Friday after battling pancreatic cancer for more than half a year. He was 80.

His death was confirmed by the Speaker of the House of Representatives, Nancy Pelosi, as well as the Congressional Black Caucus. “Today, America mourns the loss of one of the greatest heroes of American history: Congressman John Lewis, the Conscience of the Congress,” Pelosi said in a statement. (John Robert Lewis)

The son of an Alabama sharecropper, Lewis spent his life tirelessly fighting against racial discrimination and the systemic oppression of African-Americans in the United States. In the 1960s, he worked closely with civil rights icon Martin Luther King Jr and led countless sit-ins and marches to protest against racism and segregation. (John Robert Lewis)

Lewis had also acknowledged the role that Mahatma Gandhi played in shaping his career as an activist during the civil rights movement. He was deeply influenced by Gandhi’s use of non-violent methods to oppose the rule of the British Empire in India.

Last year, the American Congressman introduced a Bill in the US House of Representatives that aimed to promote the legacy of Mahatma Gandhi and Martin Luther King Junior. Through the bill, he hoped to affirm the friendships of the governments of the US and India and establish a bilateral partnership, “for collaboration to advance the development and shared values, and for other purposes”.

He had earlier proposed a similar bill, called the “Gandhi-King Scholarly Exchange Initiative Act of 2011”, which aimed to use peaceful and non-violent methods for global conflict resolution.

Who was John Lewis?

John Lewis was born on February 21, 1940, on a farm in rural Alabama. His parents, Eddie and Willie Mae, were both sharecroppers who worked in a farm owned by a white man. Later, when they bought their own land, Lewis would divide his time between attending school and helping his family on their farm.

Located in the southeastern US, the state of Alabama was a hotbed of racial discrimination. Growing up, Lewis went to segregated public schools and was inspired by the words of Martin Luther King Jr., which he would hear on radio broadcasts. (John Robert Lewis)

He founded the Student Nonviolent Coordinating Committee, a group of black college students who organized sit-ins in college towns across the southern states to protest against segregation and racism in institutes of higher education. By the time he was 23, he had already been dubbed one of the Big Six leaders of the Civil Rights Movement.

Lewis was arrested at least 40 times between 1960 and 1966. He was beaten, spat at, and on one occasion even had his skull cracked by state troopers during the many protest marches he participated in and led. 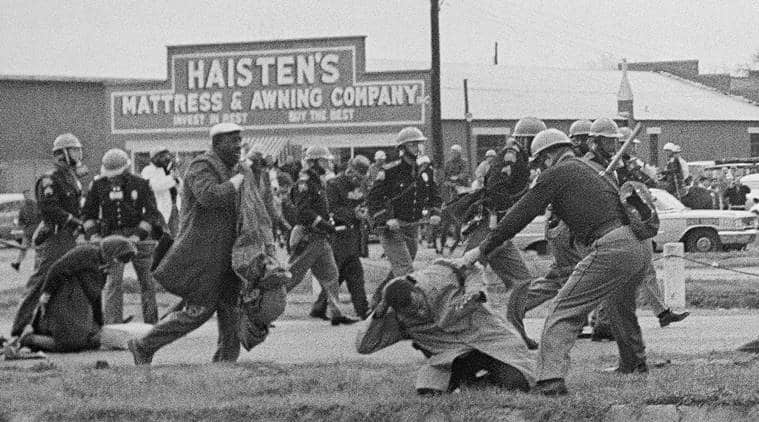 In this March 7, 1965, file photo, a state trooper swings a billy club at John Lewis, right foreground, chairman of the Student Nonviolent Coordinating Committee, to break up a civil rights voting march in Selma, Ala. Lewis sustained a fractured skull. (AP Photo/File)

He even helped organise the famous March on Washington, where Luther King delivered his famous ‘I have a dream’ speech. Lewis, too, had addressed the crowds. (John Robert Lewis)

“To those who have said, ‘Be patient and wait,’ we have long said that we cannot be patient. We do not want our freedom gradually, but we want to be free now! We are tired. We are tired of being beaten by policemen. We are tired of seeing our people locked up in jail over and over again. And then you holler, ‘Be patient.’ How long can we be patient? We want our freedom and we want it now. We do not want to go to jail. But we will go to jail if this is the price we must pay for love, brotherhood, and true peace,” he had said. (John Robert Lewis)

The Democratic leader served as the US representative for Georgia’s 5th congressional district for more than three decades since 1987. He was not deterred by his cancer diagnosis in 2019 and continued in office until this year. 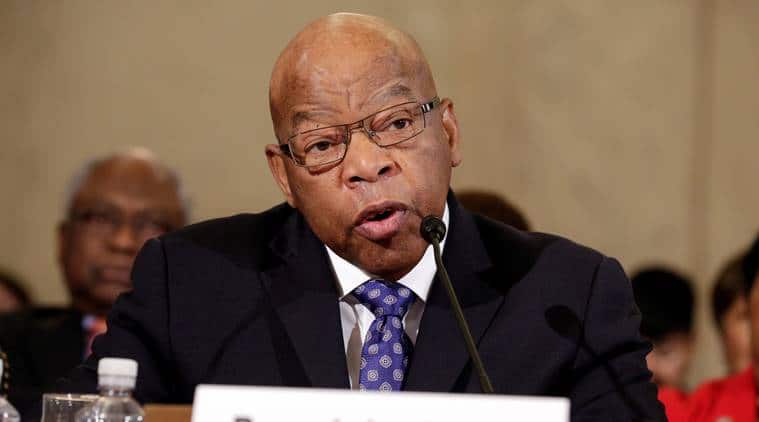 What was Gandhi’s influence on Lewis?

During his years as an activist, Lewis repeatedly drew from Gandhi’s teachings of non-violence. In fact, King himself was inspired by Gandhi’s methods of using non-violent approaches of resistance. (John Robert Lewis)

During the Montgomery Bus Boycott between 1955-56, when African-Americans protested against segregated seating by refusing to ride city buses in Montgomery city, King had said, “while the Montgomery boycott was going on, India’s Gandhi was the guiding light of our technique of nonviolent social change.” (John Robert Lewis)

In 2009, Lewis was part of a cultural delegation that was sent to India by then US Secretary of State Hillary Clinton. The trip was undertaken to commemorate and retrace King and his wife’s visit to India in February-March 1959 “to study the life and works of Mahatma Gandhi” a press release issued on February 11, 2009, by the US Department of State said. The delegation began its trip to New Delhi and traveled around India to some of the principal sites associated with Gandhi’s work. 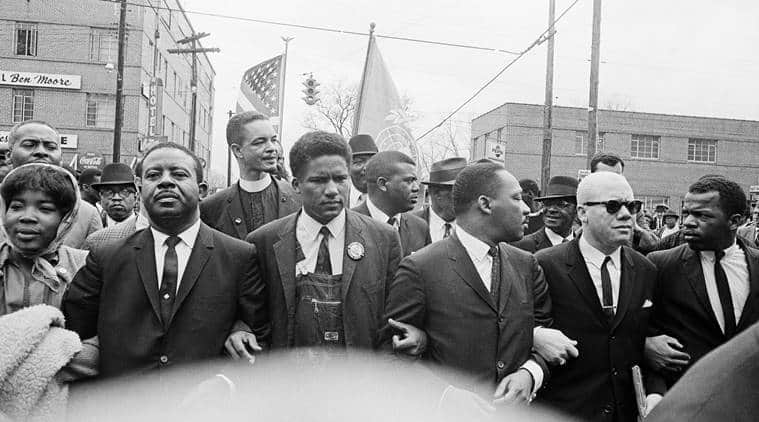 In this March 17, 1965, file photo, Dr. Martin Luther King Jr., fourth from left, foreground, locks arms with his aides as he leads a march of several thousand to the courthouse in Montgomery, Ala. From left are: an unidentified woman, Rev. Ralph Abernathy, James Foreman, King, Jesse Douglas Sr., and John Lewis. (AP Photo/File)

“The two men were not politicians or lawmakers. They were not presidents or popes. But they were inspired human beings who believed deeply in the power of nonviolent resistance to injustice as a tool for social change. Because of their courage, commitment, and vision, this nation has witnessed a nonviolent revolution under the rule of law, a revolution of values and ideas that have changed America forever. We are all a beneficiary of this powerful legacy,” he said. (John Robert Lewis)

“… I don’t know where I would be if it had not been for the teaching of Gandhi and Martin Luther King, Jr. We are looking forward to fulfilling an inspiring journey [sic],” Lewis added.

What was the Gandhi Legacy bill?

In December last year, Lewis sought a budgetary allocation of $150 million for the next five years to fulfill the initiatives mentioned in the bill. The House Bill was moved to mark the 150th birth anniversary of Gandhi and affirm the friendship between the US and India.

US House Speaker Nancy Pelosi has supported the Bill which also proposes the establishment of a Gandhi-King Scholarly Exchange initiative with an allocation of over $2 million for five years until 2025. (John Robert Lewis) In this Feb. 15, 2011, file photo, President Barack Obama presents a 2010 Presidential Medal of Freedom to U.S. Rep. John Lewis, D-Ga., during a ceremony in the East Room of the White House in Washington. (AP Photo/Carolyn Kaster, File)

The foundation, proposed by the bill, would have a governing council convened by representatives from the Indian and US governments. It would oversee grants to NGOs working in the areas of health, climate change, women empowerment and education, the bill stated. (John Robert Lewis)

Six other democratic lawmakers, including three Indian-Americans, co-sponsored the bill. Welcoming the bill, the then-Indian Ambassador to the US, Harsh Vardhan Shringla, said it reinforced “the close cultural and ideological bonds” between the two countries. (John Robert Lewis)

More than 50 years after he had taken to the streets to protest against discrimination and demand voting rights for African-Americans, Lewis welcomed the spate of anti-racism protests that have taken place across the United States following the custodial killing of George Floyd in Minneapolis.

“It was very moving, very moving to see hundreds of thousands of people from all over America and around the world take to the streets — to speak up, to speak out, to get into what I call ‘good trouble,’” he said in an interview with CBS in June. (John Robert Lewis)