bloggdude
Home NEWS Top Stories Explained: Why divide along the US-Canada border, among the world’s friendliest, is...
NEWSTop Stories

Explained: Why divide along the US-Canada border, among the world’s friendliest, is growing 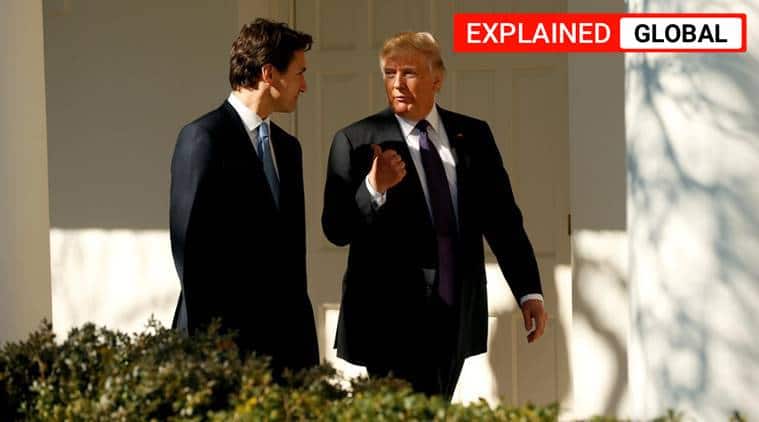 US President Donald Trump and Canadian Prime Minister Justin Trudeau walk from the Oval Office to the Residence of the White House in Washington (Source: Reuters/File)

Since the novel coronavirus first reached North America, it has all but frozen a border that has long been championed as an example of friendly ties between two countries. Since March 21, the world’s “longest undefended border” between Canada and the United States has witnessed greater restrictions than in decades — with a fierce debate now raging on how to reopen.

Last week, 29 members of the US Congress, belonging to both the Democratic and Republican parties, signed an open letter addressed to Canada’s Public Safety Minister Bill Blair to plan a phased reopening of the binational border, whose current closure date ends on July 21.

“We are asking that the United States and Canada immediately craft a comprehensive framework for the phased reopening of the border based on objective metrics and accounting for the varied circumstances across border regions,” the letter reads.

In Canada, however, there is widespread disapproval of a quick opening. On Friday, the country’s Deputy Prime Minister Chrystia Freeland said, “Decisions about Canada’s border are made by Canadians, for Canadians”.

At almost 8,900 km in length, this is the world’s longest terrestrial border and includes boundaries in the Great Lakes, Atlantic, and Pacific coasts, of which 2,475 km lies along the exclave US state of Alaska in the northwestern part of the continent.

After China and the United States, the US-Canada bilateral trade is the second largest in the world– at $718.5 billion in 2018. According to the US State Department, the two nations trade more than $2 billion in goods and services daily and support lakhs of jobs in both countries.

The vast border is crossed by 4 lakh people every day, with citizens of the two countries being able to travel through its 119 crossings by carrying stipulated I.D. such as passport cards, and most do not require a visa for visiting. A vast diaspora of both nations resides on the other side of the border.

Don’t miss from Explained | Lockdowns return, but to what effect?

On March 21, the two countries closed non-essential border travel for 30 days, bringing in restrictions on movement not seen in decades. Flights remain open, but a 14-day quarantine in Canada is mandatory, as is a minimum stay of 15 days.

President Trump had originally planned to place troops along the border to tackle the virus, but the plan was shelved after backlash from Canada.

The opening date has since been extended several times, mainly due to markedly different ways in which both nations have tackled the pandemic.

📣 Express Explained is now on Telegram. Click here to join our channel (@ieexplained) and stay updated with the latest 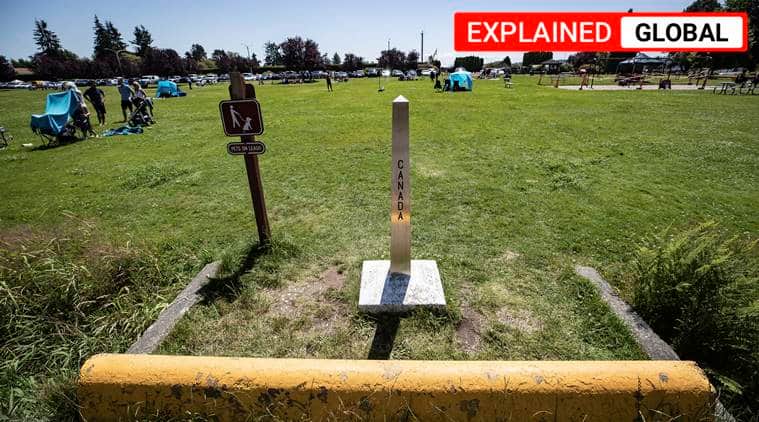 A Canada-US border marker is seen from Surrey, British Columbia, as people gather at Peace Arch Historical State Park in Blaine, Washington. People are still able to meet in the US park due to a treaty signed in 1814 that allows citizens of Canada and the US to unite in the park without technically crossing any border. (AP)

In a survey conducted between June 28 and July 2, 81 per cent of Canadians said that the border should remain closed “for the foreseeable future”, The Globe and Mail reported. Only 14 per cent said they would support reopening in regions where infections are low.

Last week, Canadian Prime Minister Justin Trudeau too chose not to travel to the US to attend a meeting celebrating the start of the newly inaugurated United States-Mexico-Canada Agreement (UCMCA)– a renegotiated version of the North Atlantic Free Trade Agreement (NAFTA) that Trump railed against during his 2016 election campaign. The Mexican president, Andrés Manuel López Obrador, did visit.

Even after the open letter by the US Congress members was published, Canada appears resolute in pushing back against a hurried reopening, with Deputy PM Freeland calling the health and safety of Canadians “absolutely priority”.

bloggdudehttps://www.bloggdude.in
I’m a blogger- a 34 something-year-old from the INDIA.
Previous articleExplained: Is EC empowered to delay Bihar elections due to Covid-19?
Next articleEncounters: What rules the law lays down, and why they are flouted

How To Beat Heat Wave During Summer? Here Are Some Suggestions